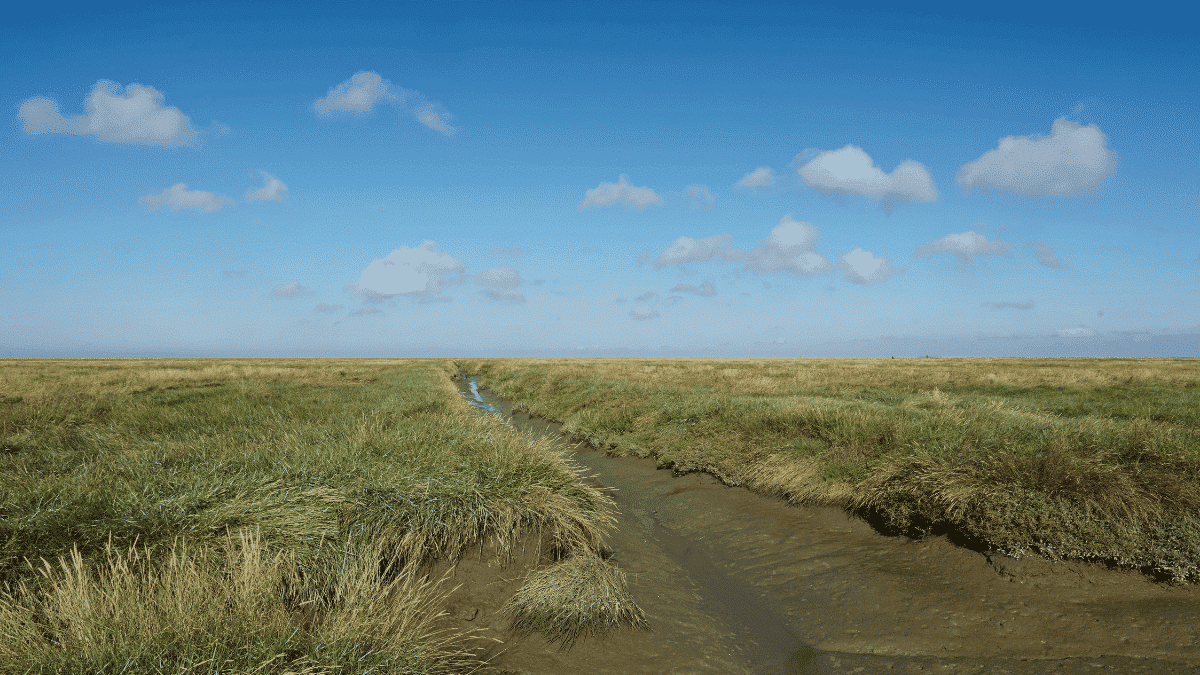 All along the Bassin d’Arcachon, you can discover spaces living to the rhythm of the tides, numerous nature reserves rich in fauna and flora, in a “marsh” type environment, typical of the Atlantic Coast. The salty meadows are mudflat vegetation, rich in sediments, with a rare biodiversity.

They have allowed man to set foot towards the ocean, by taming these natural environments. These coveted environments are the result of an almost imperceptible elevation of the seabed by sedimentation facilitated by pioneer vegetation, in the lower fringe of the shore. This is where people came to graze the sheep, collect shells, collect the sea lines, and set nets. It is also there that the first dykes were erected, then leaving it to the shore to form a new green seafront in a few decades. And the story started again. These particularly rich environments also have incalculable virtues: not only do they serve as living or feeding grounds for species that we exploit elsewhere (coastal fishing), but they have physical coastal protection properties that are irreplaceable.

The Municipality of La Teste de Buch has added a modern hydraulic structure to it, which makes it possible to regulate the waters: the salt water flows towards the Basin, while the fresh water flows back into the Salt meadows, recreating the phenomenon of the tides. while preserving the ecosystem.

FAUNA AND FLORA OF THE ARCACHON BASIN

A very particular flora and fauna have specially adapted between land and ocean. Very tolerant of sometimes extreme variations in the environment. It is a very rich environment, where animal and plant species evolve according to the currents and the seasons.

THE SALT MEADOWS OF THE BUCH TEST

The Salt Meadows of the Teste de Buch. Salt meadows and freshwater marshes rub shoulders around the edge of the Bassin d’Arcachon. Also at La Teste de Buch, making the happiness of many migratory birds. The same goes for walkers who can appreciate a particular marine area, discover the flora, have a picnic…

THE SALTY MEADOW WEST OF THE TESTE DE BUCH

Les Prés Salés Ouest was completely redeveloped in February 2014. A stone’s throw from the Ostréicole Port of La Teste, you can discover this unique nature on foot or by bike. The landscape will not be the same depending on the seasons, the level of the tide and the migratory birds…

To the north of the Bassin d’Arcachon, more than 200 hectares extend of wild vegetation, which contrasts with a natural environment sometimes “domesticated” by urban installations. Within this reserve, you can discover, at the bend of a path, snipe. But also salt-water oedipods, dragonflies, or European pond turtles.

Classified as a special protection area, it is recognized as being of international importance for water birds. The diversity of its habitats is at the origin of the presence of many species throughout the year. 80 of these species nest on the site.

The Reserve has been open to the public since 1972. You will be able to discover along the paths, many species of birds that evolve within the Reserve in complete peace of mind. All this in the heart of a preserved environment that is a delight for photographers. You will notice a rich and diversified flora. All this mixing woods, marshes, meadows punctuated by the waves which delicately join the shores of the Bassin d’Arcachon. Bring your binoculars to see in peace the 320 species of birds that nest according to the seasons. In the heart of nature, in a preserved wild environment.

The visit is punctuated by numerous wooden cabins. They are immersed in the hollow of the places, which allow you to observe Nature and its winged inhabitants. You can also enhance your visit with an ornithological discovery led by the naturalists of the Reserve. Young and old alike will be able to “ meet the birds of the moment”, “ decode their behavior ”, and above all, become aware of the importance of the Reserve and the preserved places.

“The hours “between dog and wolf”, in the morning and in the evening, are an opportunity to observe unique shows on the Reserve, such as the groupings of the Eurasian Spoonbill , the Great Cormorant or the Great Egret .”*

What to visit around Arcachon?

Company evening: what entertainment for an event?

Incentive in Arcachon, a dream setting for a break all year round